FC4 on a Toshiba Satellite M40X-RH4

This article is here for completeness, there probably isn't much valid information left in it (unless you're using FC4).

I chose this notebook because it was affordable and I had previously installed Mandrake 10.1 on a Portege 3110ct without a single problem. This new notebook wouldn't install Mandrake without a fight so I gave up on that and went distro hunting, I found Fedora Core 4 and have been quite happy with it ever since.

The installation was super easy and I had no problems (I'm assuming you aren't getting any either). THIS IS NOT AN INSTALL GUIDE!!! This is merely an attempt to make Fedora (or other distributions) work better with your satellite. If you want a guide, go to: http://www.mjmwired.net/resources/mjm-fedora-fc4.html . I will make a few recommendations...

I found an xorg.conf that has the s-video out working and the vga out as well.
Get it here: xorg.conf.better.gz
To install it open up a terminal and type the following:

Now log out and press Ctrl+Alt+BkSp and everything should be working.
To adjust the speed of the touchpad mouse open up the xorg.conf file and change:

Note: this is more advanced so deal with it. (kernel re-building)
You may not need this unless you're like me and you want to play tuxracer (yum install ppracer) or quake 3. First make sure that Direct Rendering really isn't enabled by typing this:

If the first one says yes then you're in luck, if not (most likely) you'll have to continue.
You need to have a lot of development packages installed to do this, if you don't have any or some install them by running

then under "Development" select everything in the Development Tools section.

And before I begin, most of the commands are done as root so just "su -" before this.
First get the latest kernel and kernel headers:

Go to: http://download.fedora.redhat.com/pub/fedora/linux/core/4/i386/os/SRPMS/ and get the latest kernel sources rpm. It'll be in this form (replace stars with current numbers): kernel-2.6.**-*.****_FC4.src.rpm
Install the kernel sources:

Prepare the kernel sources with:

To make building easier softlink to the source directory:

Go to the sources dir:

Make sure the build tree is clean:

In the Makefile edit the EXTRAVERSION line to anything you want (you can probably leave it if you're only compiling one kernel, as the default is -prep) Copy the pre-made .config file:

Under "Character Devices" configure both "/dev/agpgart (AGP Support)", "Direct Rendering Manager (XFree86 4.1.0 and higher DRI support)" and all the intel drivers that are available as MODULES. Here's what's the easiest configuration would look like: 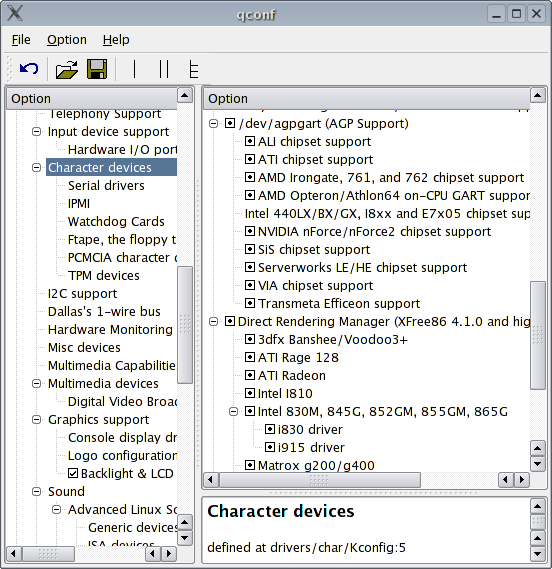 After you're done, save it and run:

If it finishes without any errors reboot and select your new kernel from the list. For some weird reason it might change your xorg.conf file, go to here to set it up again. Once it's working run

and see if the first line says yes, if it does run glxgears and see how many fps it's running at, it should be around 770. If it's not working e-mail me at mailto:nikosapi@gmail.com and I'll see if I can help.

DMA on the Multi drive

This is a very simple fix that doubles the read/write speed of your dvd/cd-rom drive.
First get the latest kernel (get 2.6.15 or later to be safe):

Now open it and duplicate the most recent entry and add

to the duplicated kernel's boot options. Here's an example:

Your cd/dvd-rom drive will now be known as "/dev/scd0" but should still be accessible through "/dev/cdrom". My menu.lst.

Wifi is easy enough to get running using the madwifi driver
You need: kernel-devel, svn, sharutils and regular development tools (if you haven't installed them by now please do, open up a terminal type /usr/bin/system-config-packages then click details in the development tools and take everything) Note: These instructions may become outdated please check with http://madwifi.org/wiki/UserDocs/FirstTimeHowTo to make sure everything is still kosher.

First install what you need (this is if you have your development tools, also you might want to update your kernel while you at it):

As root install it with:

Here's a simple bash script to get it working:

Just copy it to a file then save it, chmod +x it and run it. You can always add this script to your /etc/init.d/ (it's a little more involved than that but there are other tutorials to show you how to accomplish that).

Any improvements, suggestions, corrections can be e-mailed to: mailto:nikosapi@gmail.com