Being as bored as I am I decided to pull out an old Pentium 1 and play with it. I really liked the old P1 cases because they were small and even had an led display to tell you what frequency the processor is running at (ooo 133MHz!!). After tinkering for about half an hour I got bored again because it was just so damn slow! I realized that this was just too awesome of a case to ignore and considering that I just built a P2 machine a couple days before it was the perfect opportunity to do something neat.

I started by making sure the motherboard fit in the old P1 chassis and luckily it did with about 1cm of extra space on the top. Then came the fun part, cutting off the bracket that held the power supply and the old keyboard hole to the frame with a grinder (50 times faster than a dremel).

At first I didn't add a fan hoping that it wouldn't overheat, also because the P1 case wasn't made to have a fan and I like quiet PCs. But it ended up getting up to 70 degrees (Celsius) while running a test loop so I ended up installing a fan right above the pci cards and it dropped the temperature on average about 12 degrees! In the picture you may notice that black box on top of the case which is my usb sound card made out of an old socom PS2 headset. It has surprisingly good playback and recording capabilities and it was also my only choice as the isa cards I had didn't seem to work.

The main reason I wanted to keep this case was because of the cool looking front panel. The led display was turned upside down and I made it display 451 which is the actual speed (in MHz reported by dmesg) of the Pentium 2 that's in there now. The turbo button just turns on and off the turbo led, I didn't have much imagination for that one...

I added one of those cool airplane switches with the plastic cover on the front (it's from a real airplane, and it's made by Korry). When you press it, it disconnects the power and reset switches so no one messes with the computer while it's on.

Lastly, I added a thermometer. It was originally there to monitor the processor's temperature when I didn't have the fan but now it's just there for kicks. I even added some green leds to make the back of the display glow in the dark. It's not the most accurate way to messure temperature because the sensor is mounted on the heatsink but it still gives an idea of what's going on in the case. 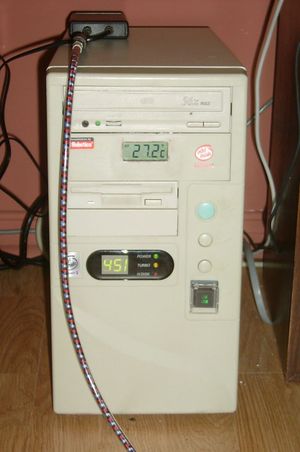 Front of the case. 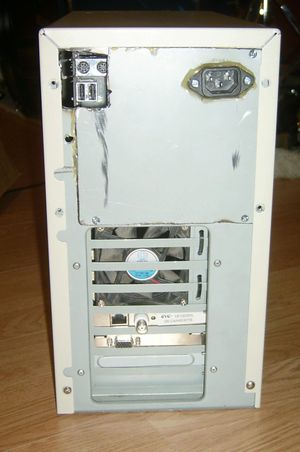 Back. Notice the the metal plate. 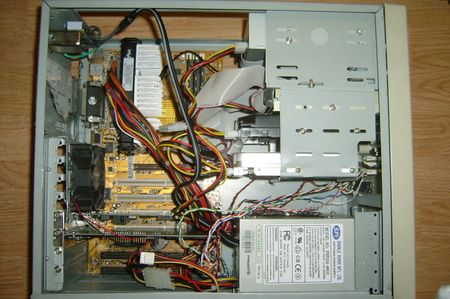 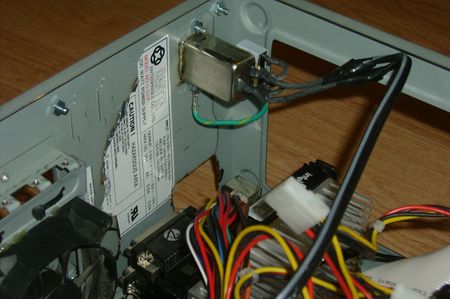 The input mounted on the back plate. 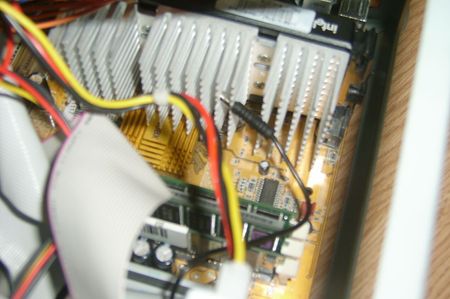 That black wire jammed in the heatsink is the thermometer's "outside" sensor.
Retrieved from "http://nikosapi.org/w/index.php?title=My_First_Casemod&oldid=13"